Cleveland has become the “IT” town! With the signing of King James, the average Cavaliers ticket price on the secondary market went from a low of $47 in 2012 to now being the highest average price on the secondary market with a $195 per ticket average in the 2014-15 NBA regular season. Last season the Cleveland Cavaliers attendance was 710,522 making them 16th of 30 teams this year they have moved up ten spots already with their attendance being at 164,496 making them 6th of 30.

Here is a look at the average secondary market ticket prices for the 2014-2015 NBA season so far.

The King Of New York

Besides the Cavaliers the New York Knicks with Carmelo staying and ex-Lakers Phil Jackson and Derek Fisher coming aboard have brought hope back to New Yorkers that the Knicks will back to winning ways again, their attendance has jumped from last season being ranked 18th to this season being ranked 9th, and while Knicks Tickets price average is second at $162 per tickets actually down from last season when it was $200 per ticket.

If the Golden State Warriors were a stock then Mad Money’s Jim Cramer would be screaming “BUY BUY BUY” starting back in 2011-2012 their attendance was ranked 22nd of 30 and the average Warriors Tickets price was just $55.00 per ticket fast forward only two seasons the Warriors are ranked 2nd in the league in attendance and their average ticket price is now $102. Who wouldn’t want an 85% rate of their return? The Warriors are currently ranked second in the Western Conference behind the Grizzlies.

The Good The Bad The Ugly

The Los Angeles Lakers have some of the most devoted fans in the NBA including Jack and numerous other celebrities with the glue holding everything together for the Lakers and their fans being Kobe Bryant. Last season the Lakers were 27th in attendance without him but still commanding one of the highest league price averages of over $168 per ticket this year they are ranked 5th in attendance with Lakers Tickets averaging $98.00 per ticket and having a 3-13 record doesn’t help the matter. With a 51% decrease in ticket prices and getting to see what might be one of the last seasons for Kobe play live makes the Lakers an attractive bargain for the price.

Help I’ve Fallen, And I Can’t Get Up

The Philadelphia 76ers are on life support, and it doesn’t look good. The last time they were ranked in the top 10 in attendance was back in the 2002-2003 season where they were 9th. Fast forward to the 2011-2012 season where they were ranked 14th with an average ticket price of $97 to the last two seasons being rated 30th of 30 in NBA attendance and 76ers tickets prices falling from an average of $75.00 per ticket to $30 per ticket.

Barry’s Tickets is an Official Partner of the Los Angeles Clippers. Barry’s Tickets pricing averages have been quoted by Forbes, AM570, LA Times and others. 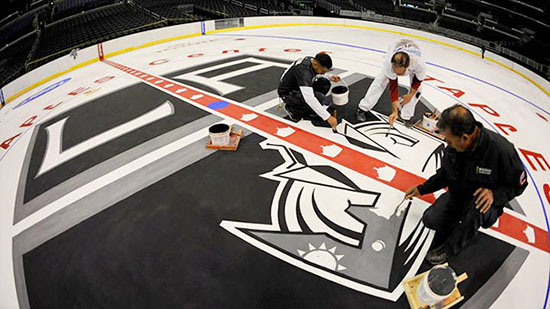 No Paul No Problem For Clippers