Lamar Odom, one of the most sympathetic but enigmatic characters in L.A. sports history, returns to the team with which he started his NBA career. It might be amazing, it might go bad, or it could be just simply strange.

With Mo Williams finally deciding Friday to exercise his $8.5-million contract option, the Clippers and Dallas Mavericks were able to agree to a four-team trade that will bring Lamar Odom (32) back to the Clippers team that drew up him in 1999.

Odom will earn $8 million for the 2012-13 season, but the Mavericks could have bought out his contract for $2.4 million by Friday if Dallas didn’t find willing trade partners in L.A. and the Utah Jazz.
In December 2011, Odom was traded from the Lakers to the Mavericks, though he was dropped just several months later after he failed to perform.

Staying in Los Angeles will mean a lot more than a career boost and extra family time for the NBA forward — it also means that he and Kardashian, 28, will be able to make starting a family of their own a top priority. The Clippers had some trepidation about getting Lamar, because of his awful season and seemingly disinterested attitude in Dallas last season after he demanded a trade from the LA Lakers, who tried to move him in an attempt to land point guard Chris Paul.

However, the Clippers had any worries allayed after Coach Vinny Del Negro and President Andy Roeser both met with Odom on Thursday at the team’s practice facility in Playa Vista.
Like many Clippers fans, seeing Odom for the first time was an experience – it was just like love at first sight. He played every position and no position, all at the same time. He sailed around the court effortlessly, never showing up out of place. Odom was tall and athletic and qualified, but most significantly, he was smooth. He was cool without even trying – a state every 14-year-old desperately tries (and fails) to achieve.

This is a fantastic trade for the LA Clippers, who need to strengthen their bench depth to make a much deeper run in the playoffs next year. Odom should really be satisfied to be back in Los Angeles, even if it’s not with the Lakers. Odom’s past playoff results will be a valuable addition to a young Clippers team that has minor championship experience. 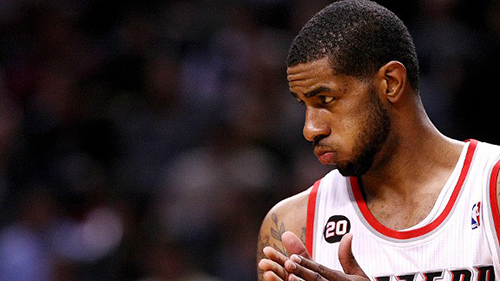 LaMarcus Aldridge Is He Worth Every Penny?