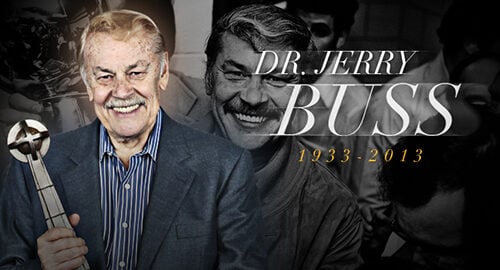 So it has been two weeks since Lakers owner Jerry Buss passed away and still there has been little mention of him getting the next statue at the Los Angeles Staples Center . Jerry Bus was eighty when he died and he left behind him a remarkable life story. He was such a brilliant mind that he finished his college degree in just over two years; nearly half the time. Jerry Bus first bought the Los Angeles Lakers and the L.A. Kings in 1979 when they played at The Forum. What transpired next were an incredible run of the Lakers in the 1980’s that led to ten NBA Championship wins. Jerry Buss was inducted into the Basketball Hall of Fame on April 5, 2010. Amongst the Los Angeles Lakers Jerry Bus took over the Los Angeles Women’s NBA Team, the Los Angeles Sparks. His ingenuity in sports established some of the strongest franchises in Los Angeles. He was a brilliant businessman even before his entry into sports. Jerry Bus had a Masters in Science and a P.H.D. in Chemistry by the time he was twenty-four. He worked for the Bureau of Mines as a chemist and then for the aerospace industry. He event taught at USC in the chemistry department. Following his teaching Jerry Bus made significant money in real estate before investing that his sports endeavors. If any non-athlete icon in sports deserves a statue at the Los Angeles Staples Center, it would be Jerry Bus. He fathered six children, all of whom worked for the Lakers at one point or another. He was fighting cancer since 2012 and passed away of kidney failure on February 18, 2013.

This brilliant sports catalyst and philanthropist should definitely be getting his own statue at the Staples Center. He practically founded it! Seeing as how L.A.’s two biggest teams play there because of the decisions of Jerry Buss and he helped downtown Los Angles become what it is, Jerry Buss should have the next Staples Center Statue dedicated to him!

Next 5 Reasons You Need To Visit The Staples Center

Kings on way home to Staples up 2-0

Are the Clippers really the best team in Los Angeles?