The historic Hollywood bowl is one of the best places to see a performance. From jazz to classical music, to sing-alongs, to your favorite band, you never forget a show at the Hollywood Bowl.  Where you sit can really make or break your Hollywood Bowl experience.

Here’s a breakdown on how you can score the best seats at Hollywood Bowl.

To score the best seats at the bowl, there are a few things you should keep in mind. You really want to have an understanding of how the seats are laid out. Here are a couple of things to keep in mind.

If you’re viewing seats from the stage, know that seats on the right are the first to get shade. So if you’re going to an event that starts early, you’re going to want to score these for the best picnic experience.

Also keep in mind that no matter how hot the day is, it always cools down at sunset. Always bring more layers than you think you may need for a cozier show.

The less expensive your ticket, the better chance you have of being too close to your neighbors. Neighbors who might be practically sitting on top of you, or maybe being loud, drunk and talking for the entire concert. You might also be around people that are standing for the entire show and blocking your view.

If you’re not 420 friendly, you’re going to want to avoid the cheap seats. There’s a good chance you’ll be experiencing some second-hand weed smoke in the nose bleed section.

If your seat is way up, make sure there’s a video screen near you. This will give you a closer look. You also might want to consider bringing binoculars for a front seat look and a cheap seat price.

The bowl’s seating is broken up into several sections that start at the front of the stage and expand outwards. Here’s a breakdown of the different seating sections.

The Pool Circle, Garden Boxes and Terrace Boxes are the first three sections of the Hollywood Bowl. The Pool Circle uses rows of standard folding chairs and is the closest you can get to the stage for events.

These collapsible box seats in the Garden and Terrace section are in a wooden portion with a center-foldable table for parties of four to six.

These seats are considered to be the best seats in the bowl. Located in the center, there are only three sections of these seats; J1, H, and G1. Unlike boxes in other sections, these seats are stadium style and have cup holders.

After the terrace and super seats, the rest of the sections are made up of benches and have letters and numbers ranging from D to X2.

Tickets at the Hollywood Bowl can start as low as $15 for the upper row and can get as expensive as hundreds of dollars for box seats which are right by the stage. No matter where you sit, you’ll experience the same ambiance and music, especially with the large video screens around the venue.

Definitely take a look at a seating chart before you buy your seats. That way you’ll have a better idea of how far away you are from the stage.

Keep in mind that the more famous the performer, the faster the seats will sell out. You can snag your tickets online or at the box office at 2301 North Highland before the show.

If a show you want to see sells out, try calling the box office and ask if they released any house seats. You may also want to try out StubHub, but be careful not to get scammed.

How to Reserve Your Tickets

There are several different ways you can go about reserving tickets for the Hollywood Bowl. Here are some of your options.

Here you can score packages of three to ten concerts and get amazing seats throughout the entire season. This is a great option if you find yourself going to the Hollywood Bowl regularly. If you’re a subscriber you will always get the first choice with tickets as well as more discounts and other benefits.

After subscriptions, this is the next best way to get tickets. Here you can buy tickets for any five concerts, and you’ll get a voucher for another extra concert for free!

You also can just buy tickets without a membership. These are the next best tickets after the subscription and five or more deals.

If you’re seeing a show with a large group, there are discounts available. This deal is only for groups of ten or more and is worth looking into.

There are $10 tickets available for senior citizens with a valid ID. These tickets are only available day of for certain Tuesday and Thursday concerts.

For only a dollar, you can get tickets in the highest section for most of their classical Tuesday, jazz Wednesday or classical Thursday performances. Keep in mind that these tickets go fast, so grab them as soon as sales open at the start of each season. This is hands down the best deal for music lovers anywhere.

People tend to wait and crowd the first security line neat the plaza and box office, which is actually not the only entry point to the bowl. There’s actually another entrance near the expanded mid or west gate, which is further up. If you skip the crowd, you can grab an extra drink to reward yourself for those extra calories you just burned walking uphill.

The much loved Los Angeles Philharmonic is celebrating its 100th anniversary. To celebrate, they are offering a ton of activities which include a free concert on September 30th with beloved conductor Gustavo Dudamel.

This concert is part of the Celebrate LA! event and will involve closed streets to link the eight-mile route between the downtown Walt Dinsey Concert Hall and the Hollywood Bowl. This will allow cyclists to travel through the city.

There will also be performance stages, activities and food along this route. You also can attend Philharmonic’s morning rehearsal at the bowl for free.

To find out how and when they are taking place, call (323) 850-2000. You even get to park up close for these rehearsals without paying, which is a real treat for Hollywood Bowl regulars, and Los Angelenos in general.

Get Your Hollywood Bowl Tickets Today

Now that you know how to score best seats at Hollywood Bowl, grab your tickets for this season today. For more deals on concert tickets, check out our website.

When Is the Best Time to Buy Season Tickets? What to Know. 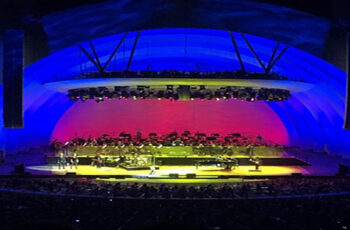