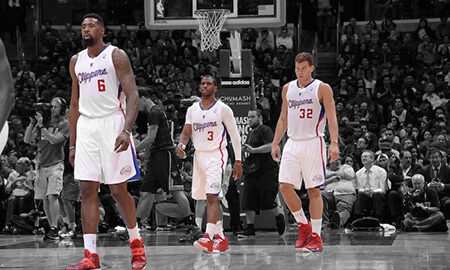 Chance to see the Clippers Vs Blazers 10/24 Contest!

The Clip’s will hit the road for Oct 12th Vs Blazers at the Moda Center, Vs Jazz at the Energy Solutions Arena on Oct 13th, Vs Warriors at the Oracle Arena on Oct 21st and the Clippers Vs Nuggets at the Mandalay Bay Events Center on Oct 18th which is a great excuse to hit “Vegas Baby Vegas”!

Clippers 2014 – 2015 Schedule:
The Los Angeles Clippers will enter the 2014 – 2015 season as one of the top championship contenders. Their schedule for the upcoming season will include several difficult games. The Western Conference will be even stronger than last season. Amongst the toughest games of their schedule, the Clips will square off against the Oklahoma City Thunder, who eliminated Lob City in the Western Semis. The San Antonio Spurs will also be one of the most difficult opponents and teams like the Golden State Warriors and the Portland Trail Blazers will be very tough to beat, too. In the East, the Miami Heat and the Cleveland Cavaliers appear to be the two strongest opponents for Lob City, keeping in mind that the Indiana Pacers will be playing without Paul George.

Barry’s Tickets is an Official Partner of the Los Angeles Clippers.

For a complete list of Barry’s Tickets Contest Rules.

Opening Day Week Away Are The Dodgers Ready?