Are the Georgia Bulldogs the Real Deal in 2013?

The Georgia Bulldogs had a ridiculous first month of the college football season. The Bulldogs opened the season against the top 10 Clemson Tigers. They took a loss in Death Valley and many analysts felt as if Aaron Murray could not win the big game. They had to come back the next week and take on another top 10 team in the South Carolina Gamecocks. This game was at home and the Bulldogs pulled out the victory. After a layup game versus North Texas the Bulldogs had to take on yet another top 10 team; this time it was the LSU Tigers. Another win between the hedges put Georgia at 3-1 to end one of the most difficult months in recent college football history. Does this mean that Georgia is the real deal?

Although the Georgia Bulldogs are 3-1 after the brutal September schedule I have not been impressed with their defense. They have given up 35, 30, 21 and 41 in four games. If they did not have a senior quarterback that has NFL talent there is no way they would have won three games. In fact, the SEC is known for defense yet this Georgia team is winning in shootouts. As long as Aaron Murray stays healthy the Bulldogs will be able to score but it may be the case that they run into a game in which they need to hold someone to win. If that is the case I don’t like the Bulldogs chances. Clemson and LSU walked up and down the field on Georgia. I would think that Alabama will be able to do the same thing. Until the Georgia defense gets better I cannot put them in the BCS National Title talk.

Now that the Georgia defense has survived a difficult first month I will be interested to see how they settle in during the easier part of the schedule. If they can put things together, stop the run and improve on their total yards given up this team could be very good. There is no argument to be made that the Georgia Bulldogs can score points. The only issue is if the Georgia Bulldogs can stop the other team from scoring points. Giving up over 21 points in all four games of the season, so far, is a cause for concern.

The shining star for the Georgia Bulldogs has been Aaron Murray. He will go down as the SEC’s most prolific passer after passing fellow Bulldog David Greene. Even though many have criticized Murray for not being able to win the big game he has now beaten a top 10 team twice in the same month. It is important to note that both of these games were at home. When Georgia plays between the hedges they seem to be a much different team. Even though they don’t have many extremely tough road games coming up they will still be challenged just because it is the SEC. Even the bottom half of the SEC causes problems when teams have to hit the road.

If Georgia is going to be a national title contender they need Aaron Murray to continue to be the quarterback he has been in the past month. A strong running game will only improve Murray’s game. One of Georgia’s strengths is their running game. An improved offensive line and rushing attack will make this a very potent offense. Before we make any long term predictions about the overall strength of the Georgia offense we will need to see how they play on the road. This week they go to Knoxville to play a Tennessee team that is not very good. If Georgia cannot score over 27 points on this Tennessee team in Neyland Stadium there might be some cause for concern. If Aaron Murray and the offense put up some huge points we might be talking about an SEC Championship game lock.

Just the other day I heard a few experts mention that Georgia was a shoe in for the SEC Championship game. Before we crown them SEC East Champions I want to see them go on the road and win some games. Playing at home is one thing but going on the road and winning in a hostile environment is another thing. Having a senior QB that will be the most prolific passer in SEC history sure helps when it comes to winning big time road games. That said, there are still some that are worried about the Bulldogs defense. If the Bulldogs defense cannot stop anyone at home how are they going to stop anyone on the road. A few road trips will help us make a much better assessment of this team. Right now, they definitely deserve to be in the top 10 but I would not give them the SEC East title just yet.

Florida and South Carolina are not playing their best football right now but anything can happen in the SEC. We have learned this over the past several years. Florida often gets better as the season goes on. If Florida can get on a roll they may end up beating Georgia in Jacksonville and heading into the SEC Championship. Some people discounted Florida solely because they lost their starting QB for the year. If the Florida defense plays as good as most people think they can they will be able to compete with any team in the country by shortening the game.

There are very few teams that have the ability to shorten the game in college football these days. Alabama had to score 49 to beat Texas A&M and Oregon scores 60 points a game. If the Florida defense can slow down the opposition’s offense and Florida can run the ball this might be a way to win some ugly games. Georgia has proven they cannot stop anybody. With this being the case Florida may be able to run it right down their throat, every single play, until Georgia does something to stop them. If Georgia decides to bring up the safeties and put more men in the box we will see Florida go over the top for some long gains. This is old school football that has worked for the last century. Whether or not Florida will be able to run the ball right at Georgia, Texas A&M or Alabama has yet to be seen.

Running the Ball in the SEC

Anyone that has read my columns or talked college football with me knows that I feel as if some teams can run the football and stop the run to win a national championship. There are a few teams that can install a new offense that scores a ton of points to win games but these programs are few and far between. The teams that can play old school, smash mouth football tend to be the traditional schools like Texas, Alabama, Florida and LSU. The teams that want to toss the ball all over the field and score points are Oregon, Louisville and Texas Tech. Interestingly, the high scoring offenses seem to do very well in the regular season but they do not do so well when a big game is on the line. Oregon has won BCS Bowl Games but they have not won a National Championship game.

Texas A&M scores tons of points but they struggle when they are in a big game against a team with an excellent defense. Ultimately, the teams that run the ball straight at Texas A&M often end up beating them. Texas A&M scores very quickly which means their defense will be on the field much more than their offense. This can cause fatigue for the defense and when they need a stop they just don’t have the energy. I have seen this time and again with Oregon and Texas Tech. When a defense doesn’t have time to rest they are going to be a little bit lazy when they are on the field.

I can remember watching the early 2000s Texas Tech teams score 50 and 60 points a game. They would win nine or 10 games a year but they could never beat Texas or Oklahoma. Teams that ran the ball straight at them ended up tiring out the defense. As soon as the Texas Tech offense got on the field they would try to score as quickly as possible. Even if they were successful scoring it did not allow their defense to get any rest. This is a recipe for disaster and injuries. Some coaches have learned they need to learn to slow down and run the ball. In the SEC it is almost always the case that the team that runs the ball better ends up winning the game. If Georgia can run the ball very well, control the clock and stop the run they will be a contender for the 2013 BCS National Championship. 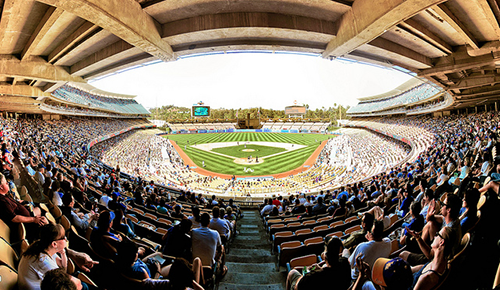 May Specials On Dodgers Tickets