A Fan’s Guide to SoFi Stadium

Did you know that SoFi stadium cost around five billion dollars to build?

People can’t stop talking about SoFi stadium. It has many features that no other facility in the world has, including an epic two-way scoreboard and a transparent roof.

Not only is it worth visiting SoFi stadium to see how magnificent it is. It also hosts incredible sporting events and concerts.

If you want to find out more about why SoFi stadium is one of the world’s best venues, keep reading and we’ll tell you everything you need to know.

A Large Seating Capacity for Every Kind of Event

There are several easy ways to explore the seating map at this huge stadium.

Since it’s Ram’s stadium, you can visit the team’s website to look at the seating map. You’ll also be able to see the ticket prices for each of the stadium’s sections.

Keep in mind that prices for single games are not cheap. This is why it can be a good idea to buy Rams season tickets instead.

If you’re curious to visit the stadium but aren’t interested in visiting a concert or sporting event, you can go to the stadium and get a tour. Since prices start at thirty dollars, it’s a lot cheaper than buying a ticket and going to an event.

The stadium’s roof opens to the outdoors from its sides. Many people who visit the stadium say that its open-air aesthetic makes them feel like they are outside.

Architects gave it an aerodynamic structure to help pull in cool air from the ocean. This means that the temperature inside of the stadium is always comfortable, no matter what time of year it is.

Even though the roof is transparent, it does a good job of blocking away the heat from the sun. It’s able to do this because it was built with a material known as ethylene tetrafluoroethylene (ETFE), which is a tough plastic that has a dotted pattern for blocking UV radiation.

One of the benefits of having a transparent roof is that it always feels like you’re outside. But when the weather gets bad, fans don’t have to worry about getting rained on.

The video board, known as the Infinity Screen, has a size of seventy thousand square feet and is positioned over one hundred and twenty feet above the field. It is able to display various videos and advertisements at the same time and is the world’s only two-way scoreboard.

The stadium is currently surrounded by many parking lots. Some of these parking lots will eventually become a retail complex that will draw visitors to the stadium at times when there are no games or concerts happening.

There are several ways to access the SoFi stadium parking lots, including Century Boulevard, Prairie Avenue, and Pincay Drive. When you enter one of the parking lots you’ll see that they’re divided into color-coordinated zones.

The best spots are reserved for season ticket holders. You should also know that tailgating is only allowed in the spaces that are the farthest away from the stadium.

You can get single-game parking passes via Ticket Master and expect to pay fifty dollars to park your car. Keep in mind that when after buying a parking ticket you’re still going to need to buy your tickets for Chargers games and Rams games.

If you’re visiting Los Angeles to attend a game or concert, keep in mind that there are various hotels that are close to the stadium, which means that it’s possible to walk there instead of parking your car.

There Are Many Great Things to Do Around the Stadium

There is a retail complex on the corner of Prairie Avenue and Century Boulevard which is still under construction. Insiders say that the complex will have many exciting facilities including a movie theater, a pub, and an athletic center.

In 2024 the new arena for the L.A. Clippers is scheduled to be finished, which will be located across Century Boulevard from SoFi stadium.

Tips for Watching a Game at SoFi Stadium

When you go to a game you’ll enter the stadium from the North and South entrances. But if you want to experience the full grandeur of the stadium, make sure to arrive from the South end. There you’ll see the sign for the stadium, which is located beside a small park that has a lake.

After you pass through the turnstiles you’ll enter American Airlines Plaza which is a gathering area for fans. If you continue walking through the plaza you’ll reach the entrance to the field.

Compared to most other stadiums, there are many food and beverage options, including Olvera Tacos and Sawtelle Food.

Don’t Miss Out: Make a Visit to SoFi Stadium

To attend an event and visit the stadium, all you need to do is visit our “events near you” page. This can alert you to some of the biggest events in your area, including concerts, sporting events, theater shows, and more. 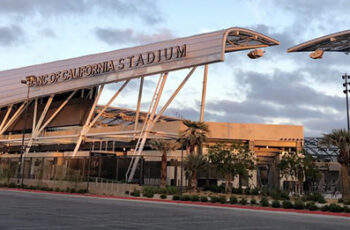 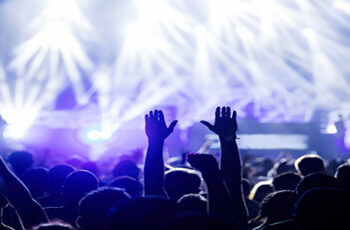 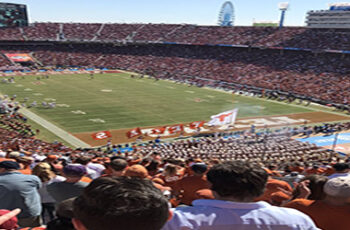